Our feature series Origins gives artists a platform to break down everything that went into their latest release. Today, Ari Dayan and Brett Gelman dive into “Love” and its accompanying video.

The L.A. pop singer-songwriter spent her youth imbued in the performing arts — and it shows. Dayan’s dance chops and alto voice are undeniable, and it’s quite the bonus that she can also write an earworm of a hook. “Love,” her second single of 2022, showcases exactly those strengths, with a hard-hitting chorus and a video in which Dayan dances her ass off.

Just in time for summer, “Love” oozes good vibes. The verses are bass-heavy and bouncy, the chorus is infectious and instantly memorizable, and the word “love” is featured over 60 times in just over two minutes (an average of around 1,800 LPH – Loves Per Hour). As Dayan and her songwriting partner Koko have designed it, there’s no room to frown while “Love” is on.

“I think your teens and twenties are for self-loathing so in that way getting older is a friend. You get smarter with age and learn you’ve gotta be your own biggest cheerleader,” Dayan tells Consequence. “I’m not saying anything revolutionary here, but it just feels good to love yourself. My morning mantra is looking in the mirror and starting the day with, ‘You beautiful bitch.’”

As Dayan admits, self-love is a process easier said than done, one that requires consistent effort. Gelman’s visual take on the song taps into exactly that underlying reality, commenting on the factors of modern life that make it less-than-easy to feel the energy “Love” preaches. Gelman, who fans might recognize from series like Stranger Things and Fleabagplaces Dayan in characteristically happy places: a party scene, a table full of champagne, a beach.

He then pulls the rug out from under you, revealing that the champagne is being drunk in an unkempt kitchen or that the beach is actually just a few towels placed behind a dumpster. The juxtaposition culminates in the final stretch of the video, where Daya breaks down while removing her makeup.

“The video has elements of post-modern comedy and surrealism serving as a comment on our individual and collective desperation,” Daya adds. “The song is all about self-love but we’re watching this woman unravel by her own manic need for external validation. It was really fun to play this deliciously tragic person. A version of her lives inside me.”

Get an early look at the video for “Love” below, followed by Gelman’s breakdown of everything that influenced the final result.

The opening and closing shots of the video were inspired by the opening and closing shots of the film Dangerous Liaisons, directed by Stephen Frears. The shots are of Glenn Close in front of the mirror — in the opening shot of her admiring herself and the closing shot where shely wipes her makeup off. We wanted to pay homage to this to illustrate the desperation of Ari’s character in the video. Starting out desperately hopeful, imagining the video, and ending with her completely having lost all hope and sanity. As with Glenn Close, Ari is a victim of her own narcissism.

John Waters’ comic genius in making trashy and completely flawed characters are endlessly shocking and funny. The video is definitely injected with his sensibility. Everything is so hot and repulsive at all times. It’s a world that is a complete chaotic mess, but also is a place you would like to hang out in. Ari, like his characters, is a hero of sorts. She is a hero because of the complete bravery in displaying her flaws. 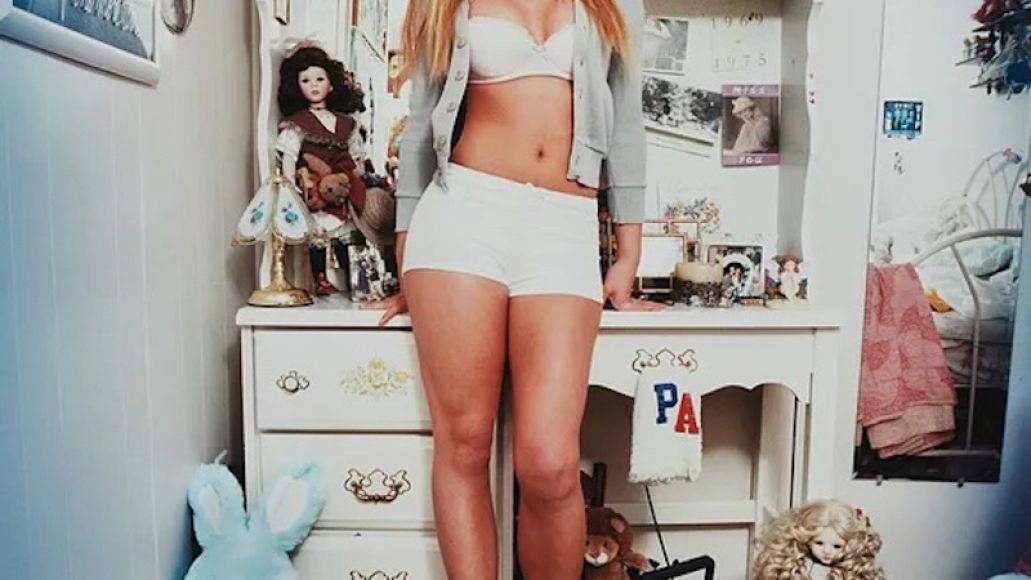 This photo is very much the essence of the energy of the video. Like John Waters, David Lachapelle is a master of artful trash. He is an artist of pure contradictions and opposites. And in this photo he takes one of the biggest pop stars of all time, at the height of her powers, stunningly beautiful, and puts her against the backdrop of the most disturbing dolls you’ve ever seen. A mixture of beauty and terror. It is simultaneously representing and commenting on the light and dark essence of pop — which is what we are doing with the video. We are commenting on the ambition and narcissism in the quest for fame, while at the same time embracing and celebrating it.

Not many things bring me as much joy as watching Gene Kelly dance on screen. When I watch it it feels like I’m visually eating vegetables. It is one of the biggest examples of pure joy that can be found in any art. I wanted to harness that joy, and I think it’s a joy Ari harnesses easily in her art. She’s also one helluva dancer, and I wanted to frame her dancing in the chorus with our amazing dancers Danny Axely and Tyy Wells, in that kind of three shot you see so often in Singing In The Rainwhere it’s Gene, Debbie Reynolds, and Donald O’Connor.

Couldn’t have done this without the genius choreography of Ryan Walker Page. Ryan created that shiny pure joy in the dancing, and then as the dance went on added variations to make it more and more grotesque, and Ari, Danny, and Tyy pulled it off flawlessly. So like Gene Kelly, acting and the story was fueling the dance.

I have to say that he’s my favorite music video director. Just the comic invention, and the whimsical spirit he has. At the same time, there’s always something about his videos that are winking. They just always blow my mind with how simple the concept is, but the execution is just full-throttle and so funny. I feel like I could watch his music videos for hours. I rewatched so many of my favorites, from “Weapon Of Choice” to “Praise You” and “Sabotage.” The list goes on and on. He is a prime example of what you can do with the music video that you can’t do with any other medium.